The Chains That Bind

Hi. My name is Gretchen and I’m a grudge-holding, fault finding, over-responsible, jealous, insecure, people-pleasing perfectionist. Oh, did I mention a know-it-all? I’m that too.

There’s more I could add to the list but I think you get the gist.

Left to myself, I’m a hot mess. Judging by the outside, I know this isn’t necessarily obvious but on the inside, that is who I am without Christ. I am all the things that weigh a person down. Just like chains. 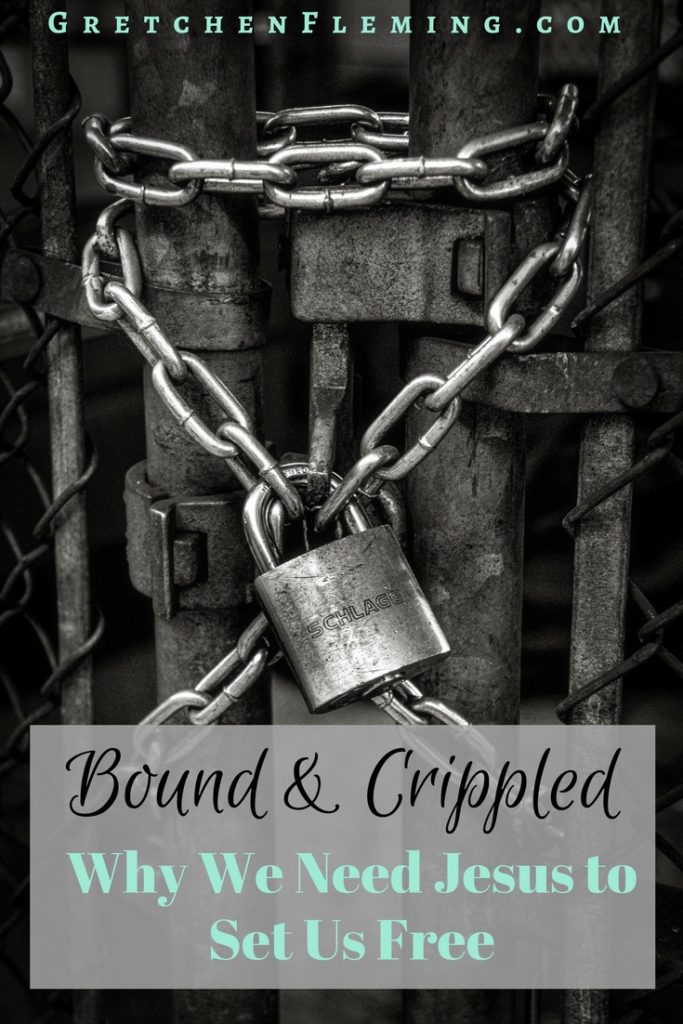 When I was in my twenties, I began to realize that I didn’t like who I was on the inside. It became obvious that I was on a self-defeating course in life and unless I changed, life was not going less than hopeful.

Unable to enjoy the abundant life Jesus came to give me.

My heart became desperate for an accurate diagnosis of what was holding me back from the life Jesus intended for me as a believer.

The thief approaches with malicious intent, looking to steal, slaughter, and destroy; I came to give life with joy and abundance. John 10:10 Voice

During this same time period, I remember reading some of Frank Peretti’s fictional books and how he described negative spirits that held people captive in harmful ways. Some of the characters in his books would have a spirit of jealousy or maybe a spirit of deceit that presided over them with their talons sinking into victim’s shoulders. Negative character traits were associated with a harmful spiritual influence.

This made me self-examine my own character at the time. I began to question generational and personal patterns that made me who I was. God used this season to refine what needed to change. In essence, He was identifying the “chains” that needed to be cast aside.

Without realizing it, I was living bound and crippled, unable to free myself by my own effort.

The helpless predicament I found myself in is reminiscent of the crippled woman found in Luke 13:10-13.  When reading this, it reminded me of the struggle I faced years ago.

10 On a Sabbath Jesus was teaching in one of the synagogues, 11 and a woman was there who had been crippled by a spirit for eighteen years. She was bent over and could not straighten up at all. 12 When Jesus saw her, he called her forward and said to her, “Woman, you are set free from your infirmity.” 13 Then he put his hands on her, and immediately she straightened up and praised God.

This Scripture is discussing a woman’s physical suffering but I think it is surprising how Jesus identifies the root issue as being from a “spirit” which caused her to become disabled. He went on to explain in Luke 13:16.

Then should not this woman, a daughter of Abraham, whom Satan has kept bound for eighteen long years, be set free on the Sabbath day from what bound her?

Though she suffered greatly, it is interesting to note that she still made the effort of attending the synagogue to listen to Jesus. As bound and crippled as she was for 18 long years, she sought to be faithful. What a testimony that is of her perseverance and heart to seek the Lord.

Another interesting fact is how she did not ask to be healed yet Jesus initiated it. She had learned to live with her condition as if it couldn’t be any other way.

So do many of us.

The Difference Worth Seeking

We can allow our “default” setting to be fleshly driven or enemy influenced. Whatever the root cause, many of us can allow that pattern to take hold unchallenged. Just like I had up until my late twenties.

Many of us can allow unhealthy patterns to take hold in our lives, leaving them unchallenged. Click To Tweet

But Jesus is not content to leave us in that state. He wants our freedom just like He did for that crippled woman. He calls us forward, no matter how long we have been bound from living the abundant life.

We can feel trapped in unhealthy patterns/sin like people-pleasing, bitterness, anger, fear, over-responsibility and so on. It really doesn’t matter what keeps us bound because Jesus is the answer for all of it. He calls us unto Himself out of compassion. It behooves us to answer that opportunity just as the cripple woman did- by drawing near to Him and believing His authority.

He identified her as “free” in verse 12 yet it wasn’t until verse 13 before she actually experienced the reality of that freedom. It was when He placed His hands upon her that she straightened up. Her immediate response was to praise God!

Although I had wanted freedom from what kept me in unhealthy patterns, it wasn’t until I drew closer in my relationship with Christ that the chains actually loosened. My freedom came as I sought Christ intimately. The more I drew near, the more the chains fell away.

The way this process looked in my life was as I committed to spending time in His Word and prayer, seeking to apply what I was learning with obedience, I began to taste the freedom He offered. The growing intimacy with Christ only whetted my appetite for more!

When I looked at examples in the Bible of when different spirits were identified, it was compelling, to say the least.

These are a few of the examples. It makes the ministry of Jesus all the more compelling.

“The Spirit of the Lord is on me,
because he has anointed me
to proclaim good news to the poor.
He has sent me to proclaim freedom for the prisoners
and recovery of sight for the blind,
to set the oppressed free, Luke 4:18

You have been set free from sin and have become slaves to righteousness. Romans 6:18

..because through Christ Jesus the law of the Spirit who gives life has set you free from the law of sin and death. Romans 8:2

It is for freedom that Christ has set us free. Stand firm, then, and do not let yourselves be burdened again by a yoke of slavery. Galatians 5:1 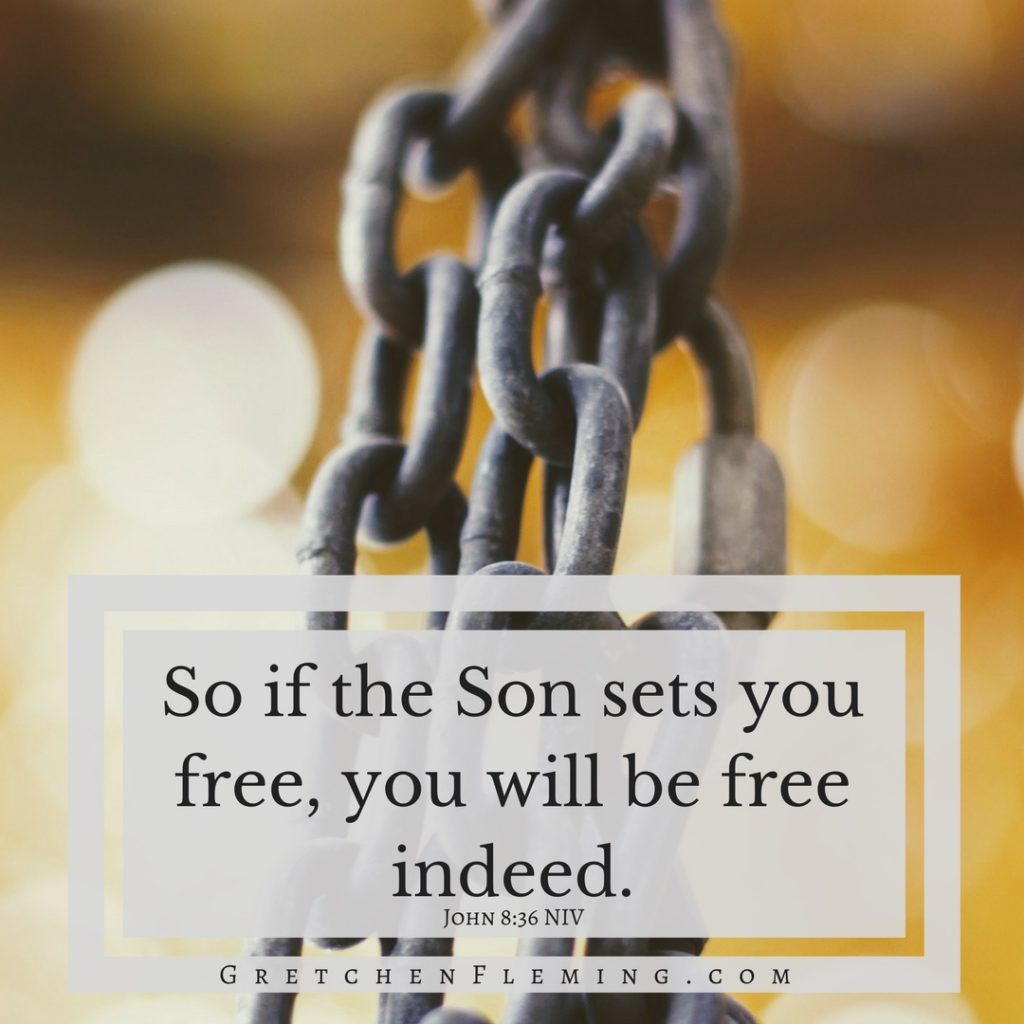 The Call Worth Answering

When He called, she came forward, incapacitated as she was. That crippled woman rejoiced at the opportunity presented to her and I can only echo the same. As crippled and bound as I was in my unhealthy patterns, I knew what Christ was offering was worth the decision to believe and submit to His authority in my life. Prioritizing Jesus was the best choice I ever made and I am experiencing the freedom still to this day.

He bids us all to come follow Him and I am so glad I did! You will be too! Let Him become your “chain-breaker” today!