I can be so blind at times, easily missing the forest for the trees. What Christ is teaching me, as I spend this year in the gospels, is how often His perspective differs from mine. What I see as the “problem” really isn’t the “problem” at all! All too often, I am misdiagnosing the issue that needs addressing.

Reading through the familiar passage of Mark 6:45-52 ESV and the companion passage of the same event in Matthew 14:22-33 ESV, I am prone to focus on the obvious threat at hand- the wind and the waves.

Who wouldn’t focus on that part of the story as the “problem”? The wind and waves were threatening to swamp the boat and the disciples were panicking! Whether the attention is on the storm in general or the effects of the storm with the wind and waves, the threat was real.

But interestingly enough, that is not the focus Christ took. 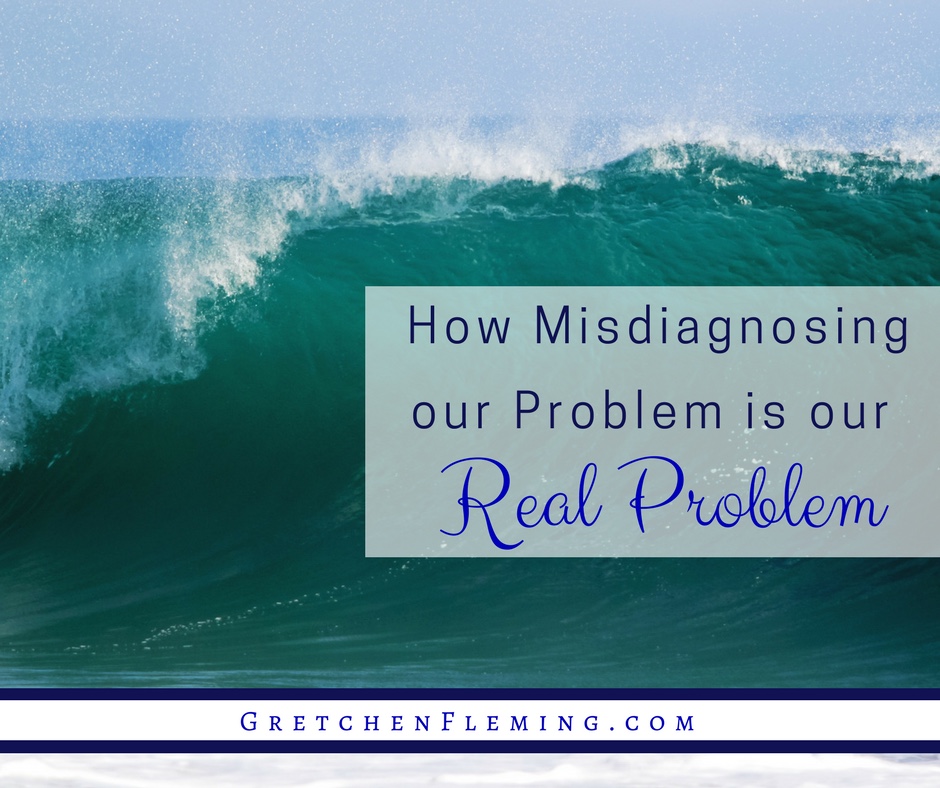 The Diagnosis According To Jesus

In the Mark passage, it was noted in verse 52 that the disciples “had not understood about the loaves; their hearts were hardened”. This was in reference to the previous miracle witnessed by the disciples where Jesus fed the crowd of 5,000 with just a few loaves of bread and a couple of fish. The disciples saw first-hand how Jesus miraculously provided what was needed. I find it revealing that God would use the events of the previous miracle to analyze the actions of the disciples concerning the storm.

How were their hearts “hardened” concerning that miracle?

What connects these two events together?

These questions are on my mind as I approach another revealing detail.

The next passage in Matthew is where Peter asks Jesus to call him out on the water. Peter wanted proof that what he saw was, in fact, the Savior walking upon the water. Jesus indeed called him out and Peter began walking on the water until his attention shifted from the Savior to how fierce the waves were around him. He became afraid at that point and began to sink. Peter quickly cried out for Jesus to save him from sinking, which He did, along with a statement/question concerning Peter’s faith.

According to Jesus, what threatened the disciples more than the wind and the waves was their little faith!

Wow! That is quite a difference in perception from what I analyze as the threat.

Christ is explaining that the obvious isn’t always what should claim the attention. Contrary to His perspective, I am quick to focus on the “storms” in life, if not the symptoms of the storms (i.e. wind and waves). He is teaching that the greater threat lies within- our little faith.

Christ teaches us that little faith is a greater threat than the wind and the waves. Click To Tweet

An analogy that comes to mind is how we try to handle germs. Focusing on hand sanitizers and keeping away from germs can be our focus today, even our obsession. We go to extreme lengths to kill every germ that has the audacity to make contact with us or our precious children.

Yet I bet God would say that He has already taken germs into account as He created us. His plan is for our bodies to have a healthy immune system. We are wired to be able to handle germs as our bodies go into automatic combat mode in response to an “enemy” entering our system. So His perspective would be that the answer to combat germs doesn’t lie in avoiding them (which is impossible) or killing them all with hand sanitizer (equally impossible), but in using good habits that promote a strong immunity.

What do the hardened hearts of the disciples in the previous miracle have to do with their little faith exercised in this miracle? It seems to me that Jesus was after their expectation to be of Him as they confronted needs beyond their abilities. He wanted to be their “knee-jerk reaction” to whatever they faced. That is faith!

Faith is Jesus being our knee-jerk reaction as we are confronted with life beyond our abilities. Click To Tweet

Christ had just revealed that they were never expected to meet their own needs in life but that they could look to Him for all things. So guess what happens when God reveals Himself to His people? He will then give us an opportunity to apply said lesson in the very near future. If we fail to apply the previous revelation of who He is, He will keep allowing us opportunities until we do. In essence, He patiently teaches us one level of faith expecting us to build upon it for the next time.

Friends, how much of today’s turmoil is because we are not applying the lessons learned yesterday?

Looking to Christ instantaneously is what He is after I believe.

My Own Little Faith

Because I am a “fixer” and a “planner”, I slipped into an unhealthy role in our family life. I began to try to prevent problems by anticipating/avoiding them or fixing them if they did slip past my defenses. As our kids grew older, this began to take its toll on me. I was exhausted from constantly handling everyone’s issues. It was like I was the hand sanitizer.

Christ began to show me that our little faith was the greater issue. My faith needed to grow to trust that God would give us the grace necessary for what we needed in life as we encountered problems. I also learned that our children’s faith needed to grow as they encountered problems in life. By trying to shield them from challenging times, I was actually hindering their faith and maturity. As I focused on the “wind/waves” in our lives, I was actually interfering with God’s purpose for us as a family.

Don’t you think I changed my ways after learning that lesson!! And sure enough, God has given us plenty of opportunities to test how I would handle the problems coming our way. One of my regular prayers for us as a family now is that God would suit us to our circumstances, instead of expecting our circumstances to be suited to us.

A Better Reaction To The Waves

I remember my own knee-jerk reaction to waves years ago. Only by God’s grace did I know what to do but this example reminds me of how I can respond to different waves that threaten our family.

It was years ago when I took my children to the beach with a friend. We had 6 kids between us that were all pretty young still. Our husbands were not with us as we went to the beach that day. The wind and surf were quite rough as we arrived.

Being from Kentucky originally, I did not grow up knowing about surf protocol. I understood that the ocean was dangerous but I was a good swimmer so I wasn’t overly concerned.

I gave the instructions that all three were to keep their eye on me so that they didn’t go too far down the shore in the surf. It wasn’t long before my oldest son, who was probably 7 or so, began to float too far on a raft. I could tell as he looked at me that he couldn’t correct himself and wanted my intervention. So I walked out to him.

By the time I reached him, I was chest high in the water. I grabbed him off the raft in one arm and held the raft in my other arm. As soon as I turned to face the beach and walk back in, the pull on my legs and feet was nothing like I had ever experienced!

In an instant, two thoughts popped into my mind.

I was terrified to move my feet because it felt like if I lifted them, they would be pulled out from underneath me and we would be sucked out deeper in the water. The waves were breaking over my head so I held Bryce up so that he could breathe. In between the waves breaking, I shouted, “Pray Bryce!!”. In my mind and heart, I immediately called upon Jesus to help us.

There was no more time to say anything else and there was nothing else I knew to do anyway.

The next moment, in my mind, popped the words to walk parallel to the beach. As fear overwhelmed me, I turned to walk left and after a few steps, I turned back toward the shoreline. Immediately, I could tell the “pull” was gone. I was free to walk without my feet being pulled from under me.

I didn’t have time to analyze my faith that day. All I knew was that we were in dire trouble and only one person could help us- Jesus. At that moment, He was my immediate response to the threatening waves. 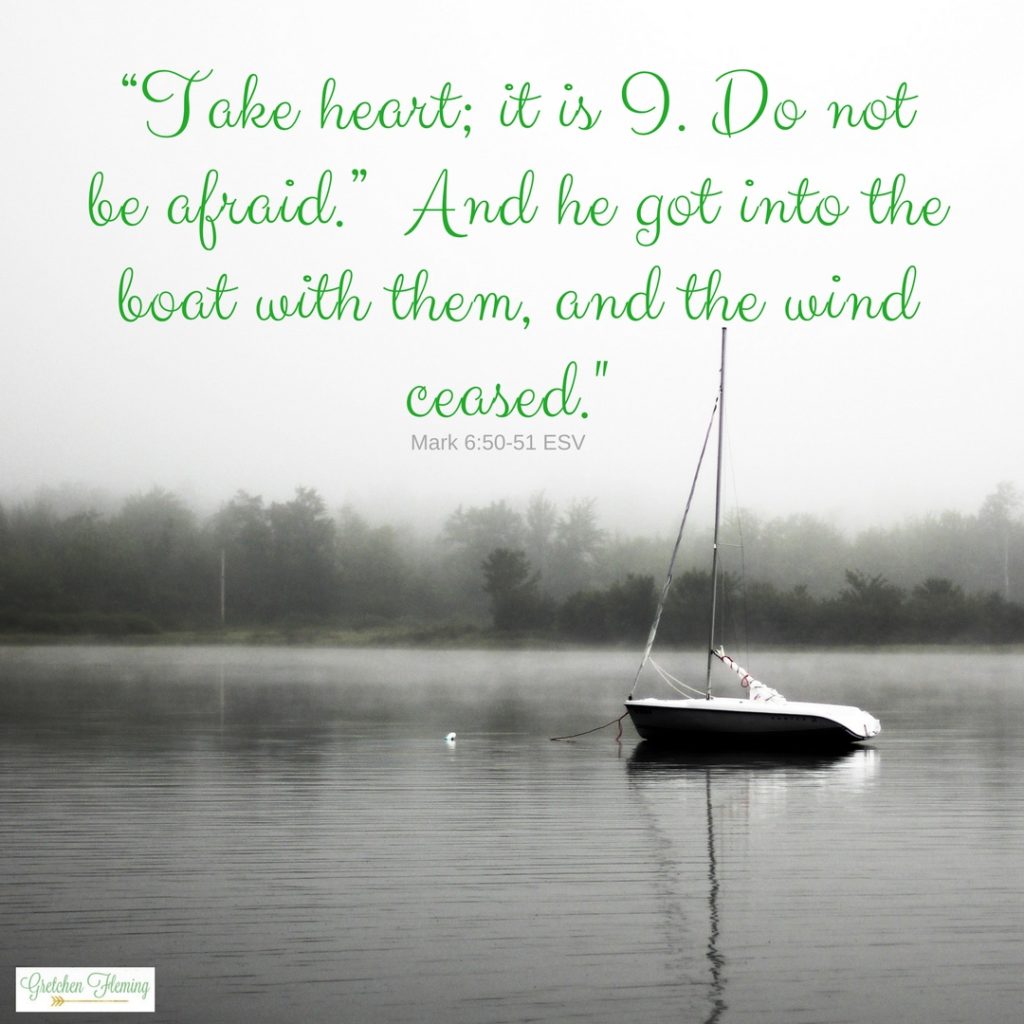 When the kids were younger, I was better about calling upon Him quicker. Somehow as they grew older, I would foolishly try to control the “waves” or prevent them, thinking the real threat was what was in front of us.

But thankfully, He convicted me of my misguided efforts, and today, He added the lesson of the misdiagnosed problem. The wind and the waves are not the primary issues needing attention.

The threat before us is always subject to the Savior beside us, no matter how fierce the storm.

The threat before us is ALWAYS subject to the Savior beside us, no matter how fierce the storm. Click To Tweet

Thinking the problem has more to do with the storms in life rather than our little faith is what is most alarming for us as believers. As I struggled through parenting teenagers, my faith grew with each wave we encountered. All that pain actually helped me respond better for the next wave coming against us. As one wave crashed upon another, one lesson built on another. I came out from those storms with greater faith than I have ever thought possible. Now peace marks my days where fretting used to be the norm.

That can be your testimony as well! Don’t give in to the distraction of the waves. Remember what is most important as you face the concerns you have.

May our hearts not be hardened as we meet our next storm. May yesterday’s lessons be applied to today’s!