Ignorance is NOT bliss nor an excuse.

Satan would like nothing better than for us to be oblivious (except maybe self-righteously oblivious). We can become lulled into thinking that just because our body occupies a church pew, we are safe. That couldn’t be further from the truth.

There are some who are just as lost sitting in a church pew weekly as those who never darken the door of a church. Reading through Acts 7 shows me a grave danger we face as regular pew-sitters, even more of a risk if we are actively involved in our church. This is because as we get comfortable with living the “church life”,  we can fall victim to blind areas of sin due to self-righteousness. 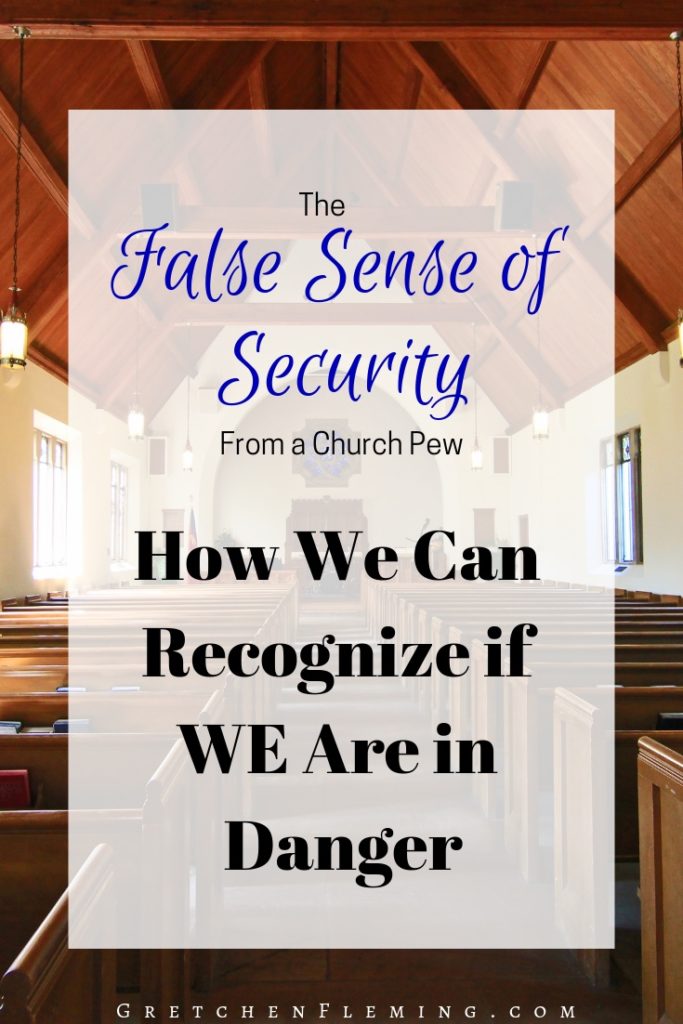 In our pious minds, we are not the problem, others are. We can even have the audacity to think that if others were more like us, the church (dare I say God?) would be better off. This is where our eternal future becomes at risk.

Stephen had just been chosen to join the apostles in their work when opposition broke out against him from local religious leaders.

8 Now Stephen, a man full of God’s grace and power, performed great wonders and signs among the people. 9 Opposition arose, however, from members of the Synagogue of the Freedmen (as it was called)—Jews of Cyrene and Alexandria as well as the provinces of Cilicia and Asia—who began to argue with Stephen. 10 But they could not stand up against the wisdom the Spirit gave him as he spoke.

11 Then they secretly persuaded some men to say, “We have heard Stephen speak blasphemous words against Moses and against God.”

12 So they stirred up the people and the elders and the teachers of the law. They seized Stephen and brought him before the Sanhedrin. 13 They produced false witnesses, who testified, “This fellow never stops speaking against this holy place and against the law. Acts 6:8-13

Stephen spends Acts 7 addressing their FALSE charges against him when this happens.

51 “You stiff-necked people! Your hearts and ears are still uncircumcised. You are just like your ancestors: You always resist the Holy Spirit! 52 Was there ever a prophet your ancestors did not persecute? They even killed those who predicted the coming of the Righteous One. And now you have betrayed and murdered him— 53 you who have received the law that was given through angels but have not obeyed it.”

The Stoning of Stephen

57 At this they covered their ears and, yelling at the top of their voices, they all rushed at him, 58 dragged him out of the city and began to stone him.

The violence that breaks out against Stephen is by the pew-sitters of his day! Churchgoers, not pagans! They conspired to lie about him to such a degree that it provoked a mob mentality that ultimately cost Stephen his life.

How can we as “committed” religious people get it so wrong? In a fervent effort to uphold some of God’s commands, we end up breaking others. We profess a righteous standard without living up to it.

The word for this is hypocrisy.

With a fervent effort to uphold some of God's commands at the expense of others, this is called hypocrisy and if ignored, it compromises our standing before God. Click To Tweet

How does this happen? Too easily, I’m afraid.

It can be very tempting to pick from God’s commands those we want to pay the most attention. In our natural human tendency, we usually choose those commands where we feel strongest while we try to dismiss or ignore the ones which highlight our weakness or condemn our action.

It leads to doing more harm than good, as in the case of Stephen. The religious people thought they were upholding God’s standards when they were actually breaking even more themselves.

Where was the breakdown?

Stephen identified the breakdown from their religious perspective and processing.

The Holy Spirit is meant to guide us into God’s Truth and convict us when we are wrong, not to mention many more ways we benefit from the third person of the Trinity. One of my pastors (Joby Martin) used to say that the Bible is both a map and a mirror.

What is critical is that we heed BOTH purposes. If we only use it as a map without applying the mirror aspect to our own lives, then we are in grave danger. The unfortunate temptation in the culture of the church is that we can get really good at using the mirror for other people without ever using it for ourselves.

When we do this, we are resisting the Holy Spirit because we are receiving the commands of God without obeying them. We are not allowed to cherry-pick the ones we obey from the ones we want to ignore. Just as the religious leaders in Stephen’s day were dogmatic over their false allegations of him speaking against the Temple/God’s law, they were bearing false witness and murdering which was worse.

What is the risk?

Their hypocrisy stirred the judgment of Jesus from the beginning. He had some frightening things to say about those who choose to live their church life as a hypocrite. These verses reveal the seriousness of their unrepentant lifestyle.

The bottom line in this practice of hypocrisy is summed up by Matt. 5:20.

For I tell you that unless your righteousness surpasses that of the Pharisees and the teachers of the law, you will certainly not enter the kingdom of heaven.

By using God’s commands to find fault with others without first and foremost applying it to ourselves, we fall into the very same trap of the enemy as did the religious leaders of Jesus and Stephen’s day. So how can WE know if we are suffering from the same danger? Here are several observations that can help identify hypocrisy.

You know you are a hypocrite when……

In summary, you use the Word of God as a weapon against others rather than a mirror for yourself and this will send you where you DO NOT want to go.

He will cut him to pieces and assign him a place with the hypocrites, where there will be weeping and gnashing of teeth. Matt. 24:51

What is the solution?

No one wants to be a pew-sitter in hell, so it is vital that we do the one thing that can prevent that!

Examine ourselves regularly and repent!

What the religious leaders did not do was examine themselves on a regular basis. Throughout church history, those believers who were considered the most faithful DID search their hearts and minds for any sin. They even went as far as to ask God to do it for them in case they were being blind to it! Psalm 139:23-24 says,

Search me, God, and know my heart;
test me and know my anxious thoughts.
See if there is any offensive way in me,
and lead me in the way everlasting.

If we do not want to end up like some of the pew-sitters who thought they were in the right to condemn Stephen then we have to examine ourselves TODAY. Hypocrisy is a slow, subtle disease that can ruin the best of us if we are not diligent. 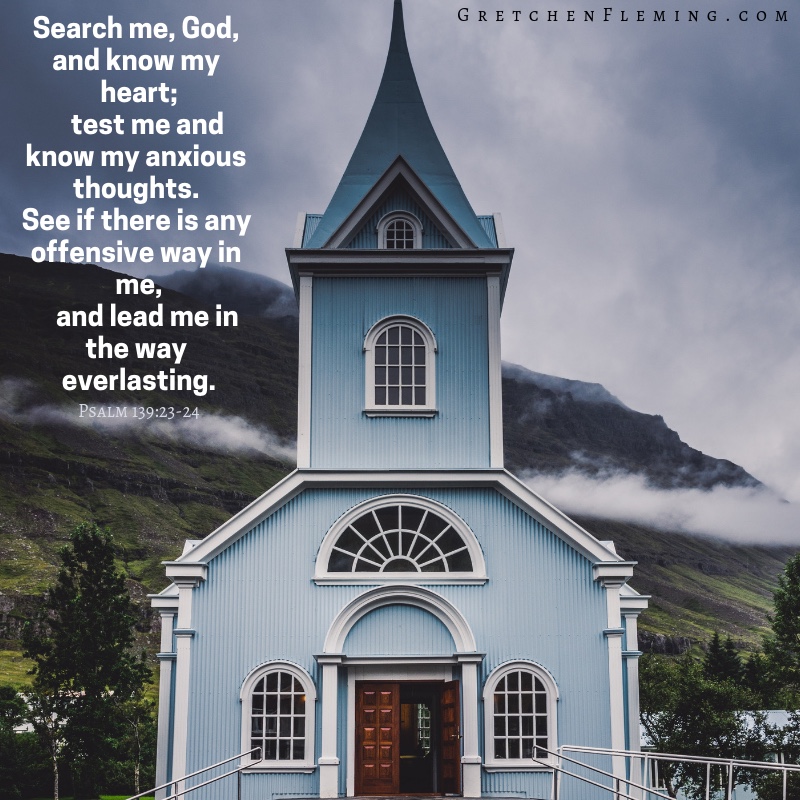 Our weapon against hypocrisy!

Our enemy is always on the prowl to sabotage God’s people in their faith but Christ has given us all we need to successfully fight against this. By cooperating with His Holy Spirit and using God’s Word as a map AND a mirror, we will experience the full measure of joy through our faith as God intended.

When I sit in my pew, I want to see Jesus, up close and personal like Stephen, rather than all the “faults” of those around me. I’ve got enough to handle as I work through my own sinful tendencies. I don’t have the time nor the energy to harp on yours.

« What is my responsibility as a Christian in regard to the mandates?
Spiritual Repercussions- Why It Matters What We Do With Our Salvation »